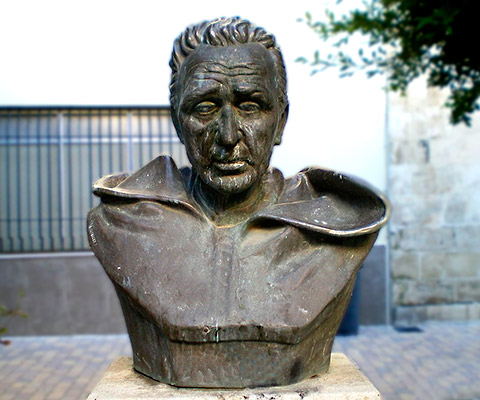 This bust is dedicated to the Father Ballarín, Prior of the Dominicans. Ballarín was seeing the progressive deterioration of the city and thought about how to safeguard all that was in charge. He had a special interest in maintaining the image of our patron saint, the Virgen del Mar, even to replace it to prevent spoilage, what was done with the strictest privacy. This helped keep the image, especially with the events of 1936 in which the temple of the patron suffered several attempts of fire, with the July 23 of that year, when it was burned, leaving converted the ship into a pile of rubble.

To 39 and remained the temple, when a group of 50 almerienses attended by volunteers to the call of the Father Ballarín the debris removal began, but still, the image remained hidden since the shelling intensified in the city and risked It is destroyed.

After the end of the civil war, the voice that nevertheless the image of the Virgin had been saved came, and in April, the image came to light, thanks to the efforts of Father Ballarín among others. In addition, Father promoted the reconstruction and fundraising for the sanctuary.