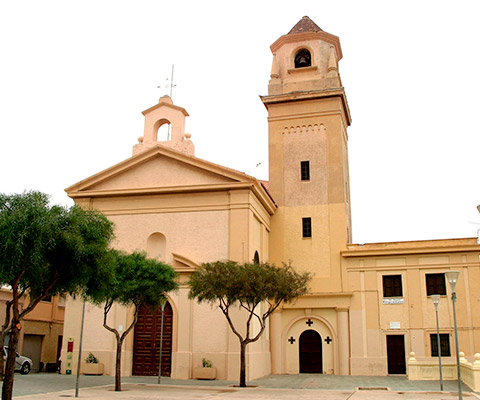 The church was blessed in 1893 and is located in the old Barrio del Aljibe (current Pescadería-la Chanca). Its structure shows clear neoclassical influences within a classicist eclecticism. Its tower, in the centre of the facade shows a type of parallel architecture and civil construction, typically such of the City of Almería, and a model that will be repeated by later almerienses temples.

The small church is equipped with an elegant stone staircase which is accessed by the road of Malaga. Several times renewed from the ground up, the church dates back to 1500, building on a mosque in the old Muslim quarter. From the beginning the chapel was dedicated to San Roque, lawyer against the plague. It was reshaped during the late nineteenth century, until in 1900 it is erected in parish. The church suffered the ravages of the Spanish Civil War of 1936-1939.