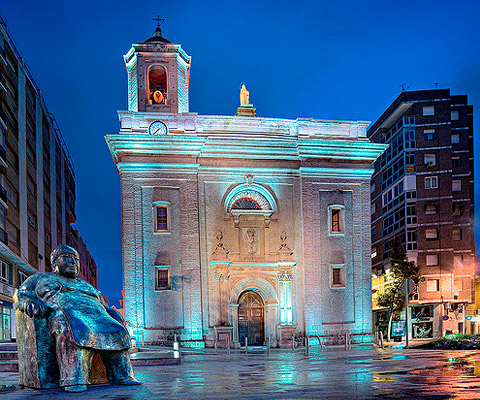 San Sebastián Square has not taken the name of the church, but it was given to the temple. Since the eleventh century, it was one of the most populous parts of the city, the crossroads of all roads coming from northeast and the Levante region. In the Muslim Almería situated outside the walls, the church presided over the mosque and Christian Almeria became the haven of San Sebastián. In the eighteenth century, anchurón took place. Here, today, there is a small and simple monument to the Immaculate, built in 1800 and restored after the Spanish Civil War of 1936.

The church, which is located on the square of the same name, was a mosque in the Muslim period, later moving to becoming the haven of San Sebastián. In 1673, the “Parroquia de San Sebastian de las Huertas, popularly called” San Sebastián of Güertas “coming her name, to be in a place called” San Sebastián of Güertas “was erected. The church was consecrated in 1679 as bishop D. Antonio de Ibarra, whose coat of arms were dipicted on the side. The temple is one of the seventeenth and eighteenth centuries and has two doors, the main one that overlooks the square and the street side Alcalde Muñoz. It has a characteristic polygonal tower, with its predominantly Baroque style. Its facade is made by Ventura Rodriguez and J. Antonio Munar and the relief that is in it, is attributed to Juan de Salazar (18th Century). On the sides of the church the powerful buttresses and the characteristic dome of the street Murcia are seen. The facade of the church is presided over by a side tower.