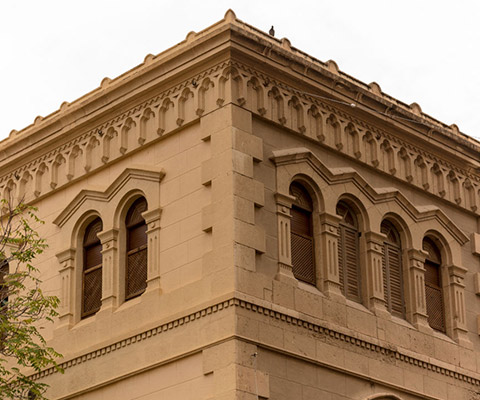 One of the most significant aspects of the Restoration period in Almeria is the resurgence of religious architecture, as during that period the task of constructing major religious buildings started in the city. Among the buildings that were erected, stands the Convent of the Church of the Society of Mary, built at the behest of the bishop of the diocese José García Orberá.

The origin and conception of the building project is due to the Bishop Orberá. It involves constructing a college of free education, so he asked the City 8,851 m. in El Reducto. Once granted, the Bishop resigned claiming to have found land in better conditions elsewhere in the city, right at the confluence of the Boulevard of Bethlehem with the Paseo de la Pescadería (Bishop Orberá). This substantially altered the basis of original project, since convent school that arose in the workers’ western expansion had a character of gratuitousness for the immediate needs of the sector. The move to lift bourgeois culture in education considerably widened the purpose of the project and laid the foundation for what has now become in situ.

The construction is due to the plans of architect Dr Enrique López Rull. The works started in 1882 were inaugurated in 1885. The main rectangual facade facing the Rambla Obispo Orberá. The central part of this construction is occupied by the church on one side and on the other side the constructions designated to the convent and school. The architectural features of the building are included in a medievalist history with Gothic and Romanesque roots.