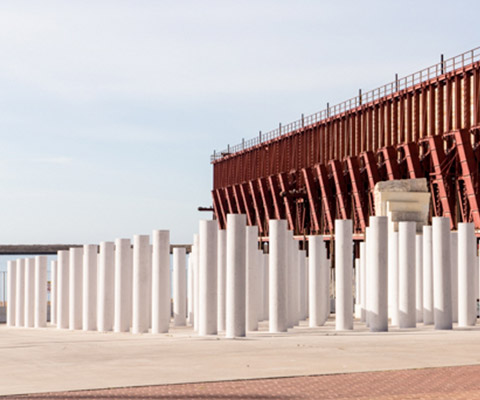 Together with The English Cable, in the same Almadrabillas Park, the monument dedicated to the victims of the Nazi Holocaust almerienses is erected. It is the work of Almeria Mª Ángeles Lázaro Guil and was inaugurated in 1999 by the last almeriense survivor of the concentration camps, Antonio Muñoz Zamora, who saved his life thanks to another Spanish he wrote in his entry form to the camera gas “exterminated”.

The monument commemorates the 252 almerienses that between 1940 and 1945, were imprisoned in the concentration camps of Mauthausen and Gusen (Austria), and 142 of whom did not survive. This is the same number of columns cement (142) constituting the assembly and surrounding a central part representing forced these almerienses had to perform work.