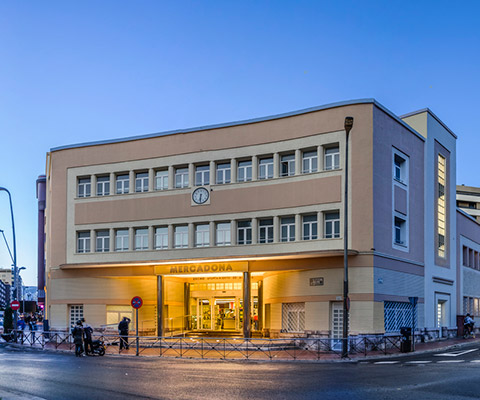 The station was built in 1952, according to project architect Guillermo Langle Rubio.
Its construction was necessary in the city because the few existing railway communications determined that communication with the people of the province and neighboring capital will be made by road.

The building represents a prototype of almeriense architectural rationalism, which links to the functional models of the Second Republic developed by Guillermo Langle in our city, such as the building of the local police in Street Santos Zarate. Its pavilion facade, with continuous window standardized forming long friezes, with cantilevered entrance canopy and free piles at the entrance, along with the concave shape used to fit the chamfer Plaza de Barcelona, which contrasts with the rounded shapes of the lateral bodies in the entry hall of the station, endow it with such creative freedom to the point of being declared by the Board of Andalusia of Cultural Interest.