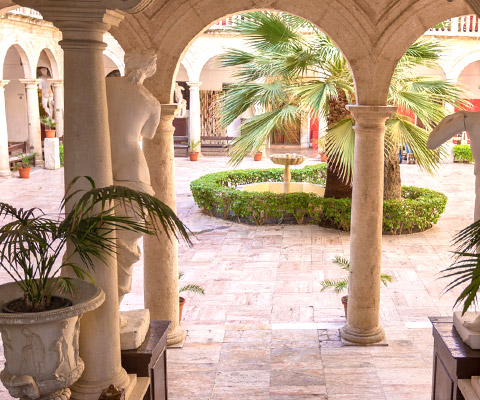 School of Arts and Crafts

The building was the Provincial Institute of Secondary Education during the second half of the nineteenth century and much of the twentieth century, being the highest educational institution in the city. It replaced the primitive College of Humanities, since 1840, worked in which was Convent of Santo Domingo. During the time that was Institute were made in it important reforms affecting internal distribution and its three facades. The located south (Calle General Tamayo) was restored in 1889 for being in ruins since 1867.

The general composition of the building calca almost strictly the College of the Pure, featuring the same design on the openings of the ground floor, splayed and columns in the jambs, countering with the completely different floor, framed by eclectic elements classicist origin.

The central courtyard of the school, belonging to the former convent of Santo Domingo, dating from the eighteenth century, and is, today, an exceptional setting of important exhibitions and cultural activities almeriense life, such as the Andalusian Center of Photography , which has its headquarters there. The cloister was restored in the eighteenth century and the third floor is newly built.