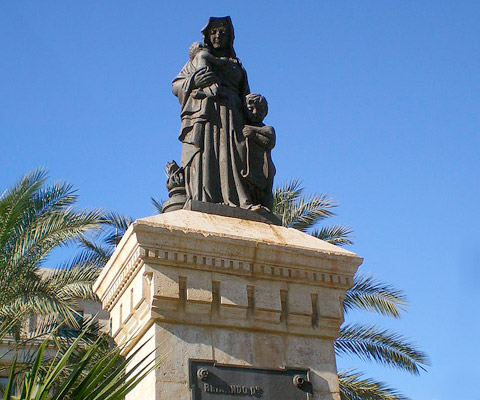 The Statue of Universal Charity, known as the “woman with children” or “mother with her children” is a work of Almeria sculptor Luis Fernandez Cortes and is located in the park candles, south end of Avenida de Federico García Lorca, near the old Plaza Circular, the city of Almeria, Andalucia, Spain, built in 1898.

It was the first statue with which featured the city. Its original cost was 5,235 pesetas. About ashlar stonework a figure of iron, Charity or mother holding a child in her arms and another appears clinging to her skirt, carrying in his hand a scroll with the text “1891” is supported.

It was erected in memory of the victims of the floods that hit the city on September 11, 1891, about twenty people, including four children. Shows a woman clutching two children. The cost was borne by initiative of the Queen Regent Maria Cristina of Hapsburg-Lorraine, during the minority of King Alfonso XIII, who made the wadi channel, build homes for the homeless and the neighborhood or walk Charity. In gratitude adjacent street called Reina Regente.