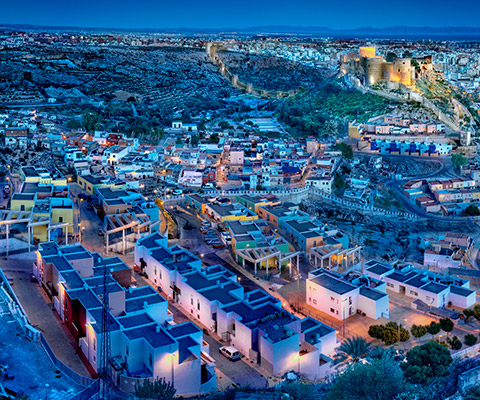 This quarter, currently Pescadería-La Chanca, was the old Muslim quarter Al-Hawd, which means “water tank”. this name is given by the existence of a well in that period. The neighbourhood, stretched from the Avenida del Mar to the Barranco del Caballar, bringing together fishermen, sailors and merchants from the west point.

The neighbourhood Chanca, was developed from 1850, and the name means “place or store trap” where fishermen keep their gear and prepare them for fishing. In this neighborhood was the Jewish quarter, near the church of San Roque, until the expulsion of the Jews in 1492. According to Idrisi, was densely populated and well equipped with bathrooms, shops and inns.

This neighbourhood has formidable viewpoints of the city: The so-called “Barranco de Greppi” and the “Cerrillo del Hambre” can be accessed by the Cara street, one of the most typical streets, as is that of the Old Hospice.