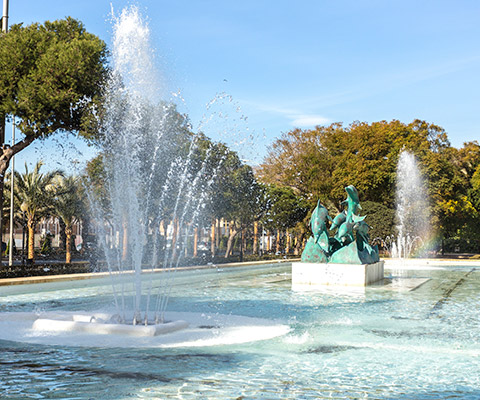 The Port and Nicolas Salmeron Park

Muslim port, so important in the tenth century, no trace. It was from Abderramán III (tenth century) seat of the Caliphate axis fleet and an intense commercial life. Through him, Almería had contacts with the Mediterranean.

The needs of smelting lead from Heredia in Pescadería, accelerated the construction of a pier to the west, while the Board of Port Works, try to activate the lift construction dock and the dock that would culminate in 1906. One of the most important products of port traffic was iron ore, hence acquired great importance the mineral carrier or “the English Cable“, a representative example of iron Architecture and mining importance of the nineteenth century.

Currently, the port is divided into three areas: “Pier West” or fishing harbor, the commercial dock where ships dock and the sport dock with the marina and the beach, where is “The Cable English”. It is noteworthy dock lift, where real steps were built with the arrival in our city of Isabel II. From this place a beautiful panoramic sea urban observed.

In the Nicolás Salmerón Park is the Source of Fish, current Plaza de la Marina, which serves as a separation between the Old Park (west) of the nineteenth century and built in 1940, in honor of the President of the First Republic New Park, D. Nicolas Salmeron, born in Alhama (Almería). The park was completely restored in the last years of the twentieth century. In the section dedicated to Nicolas Salmeron are two fountains representing the figure of “Marino” and “Dolphin”. Waterfront Park and Puerto recent urbanization of the Rambla (XX century and early XXI) that gives the city an aspect of modernity stands.