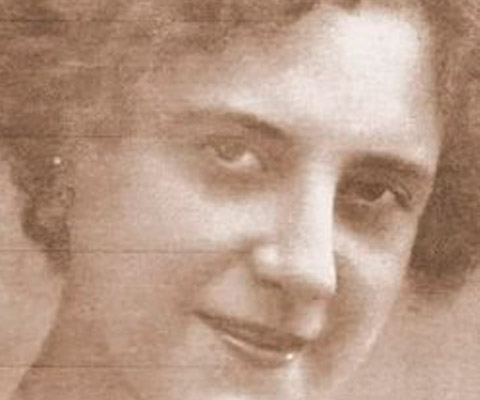 Concha Robles Pérez was born in Almeria in 17 October 1887 in Almedina street. She was the daughter of the guitar player, Juan Robles, who introduced her to theatre and Purificacion Perez. When she was 12 years old, she left Almeria for Madrid and was attracted by the theatre world. At the age of 25, she entered the Maria Guerrero and Fernando Diaz theatre company (the prime company in Spain).

Concha had to pass a difficult trial to enter the Company, she had to recite the verses of El Alcazar de Perlas of the poet from Almeria Francisco Villaespesa. She abandoned her career and got married with the cavalry commander, Carlos Verdugo. They lived in Granada and where her marriage life was unbearable as her husband, an older man, was very jealous. Concha missed theatre very much also, therefore she separated legally from her husband and began her career again, but the end would be tragic.

Her tragedy and death in Almeria.

Concha Robles was rehearsing a Play in the new Cervantes theatre in Almeria, her home town. The play was titled Santa Isabel de Ceres, the author Alfonso Vidal Planas. The Play was accompanied by controversy as it was about “love merchants”, this of course was a very difficult subject in such a puritan society.

The situation was very tense for the premier, the beautiful Cervantes theatre, the controversy on the street, rehearsals, the Catholic press demanding a boycott…, while the theatre entrepreneurs were trying to promote the Play explaining that in the plot, there were shots and one of the characters dies. The City was divided: on one side, young progressive people and on the other, conservative citizens claiming the Play was immoral.

All the tickets were sold and it was the talk of the Town; finally the day of the premier arrived. Conchas’ ex-husband, Carlos Verdugo a jealous member of the military, secretly travelled to Almeria to see the Play; it is said he was seen around the Cafeteria Colon. Carlos Verdugo handed in a false card, supposingly belonging to a well known theatre entrepreneur. When Concha came out of her dressing room to see the man, she was shocked to see her ex-husband with a gun. She was so frightened that she hid behind a 16 year old boy, Manuel Aguilar, thinking he would not dare to shoot an innocent person. She was wrong, he fired several shots without stuttering; the spectators were astonished at hearing the shots until Concha fell on the stage and the spectators began to applaud thinking it was part of the Play. Then the young boy, Manuel Aguilar, also appeared wounded and the director of the Play tried to explain what had occurred. Concha was quickly put on the sofa on stage. Verdugo shot himself in the temple, but did not die, he only lost an eye; he was condemned to life sentence; Manuel was taken to the Provincial hospital where he died at dawn.

Conchita Robles died tragically end at the age of 35 and now there is a legend that says that her spirit roams around the Theatre trying to finish the last act. It is said that in each decade an unforgettable tragedy occurs which leaves a deep impression in a town, city or a theatre as it is the case.

In 2010, the city of Almeria placed a plaque in honour of Concha Robles at number 14 Almedina street, her birth place.