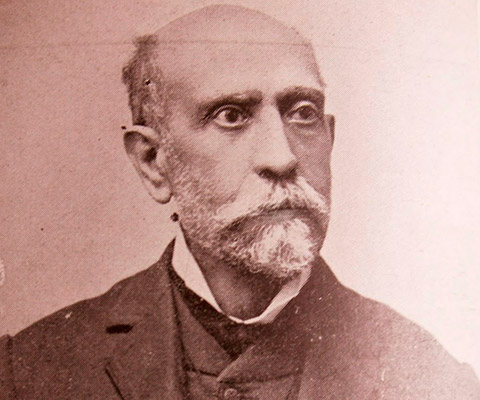 Nicolas Salmeron y Alonso (Alhama la eca, 1837 – Pau France, 1908) was a republican, university professor, president of the I Spanish Republic and a man of profound moral and ethical convictions. He tried to spread the ideas of the German philosopher Krause in Spanish politics and to guide XIX Century and XX Century Spanish Republicanism towards parliamentary orthodoxy. Nicolas Salmeron y Alonso interest in politics was forged inside his own progressive and democratic family. His father, Francisco Salmeron Lopez and his uncle Nicolas were liberal pioneers in the province of Almeria influenced by the landing of the “Coloraos” (group of liberals who tried to oust Fernando VII) in 1824. He was born in the very liberal Alhama la Seca, a village of small and medium class peasants. As a student, he came in contact with democratic ideas in secondary school in Almeria and afterwards in Granada at the University studying Law and Philosophy and Literature.

Nicolas Salmeron was influenced by Krause is (Karl Christian Friedrich Krause, German philosopher) ideas at a very young age; he studied third year of Philosophy in Madrid in 1855 where he was in contact with Julian Sanz del Rio professor who introduced Krause is ideas in Spain. He studied with the likes of Gumersindo de Azcarate and Francisco Giner de los Rios, the second generation of disciples of Sanz del Rio. With these young men, Sanz del Rio planned the reform of Spanish society based on Krause is ideas.
The most part of Salmeron is life took place in Madrid between philosophy teaching and politics. He finished Philosophy and Literature (1858), continued in the University as auxiliary professor in the Faculty of Philosophy (1860) and finally head of department in the Metaphysical department of Philosophy and Literature (1866). Teaching for Nicolas Salmeron was an authentic holiday and his prime way of living.

Philosophy will be his main inspiration and crede in life as he lacked a positive religious faith. Despite of having a small number of written works, he always wished to be remembered as a philosopher. He was known by his democratic ideas and his oratories at the Universal café is intellectual debates and at the Circulo Filosofico (philosophy association) at Cañizares street. He wrote at the Democracia journal and participated actively in the Democratic party.

He refused to sign a document in favour of the Queen which cost him his post as head of deparment (1867). The Philosopher was a convinced democrat and he participated in political conspiracies against Isabel I which made him go to jail.

The republicans in Almeria insisted he present himself as candidate for the Spanish Constituent Congress for the constituency of Almeria in January 1889, competing with his brother Francisco, who was running for the monarchy bloque. Losing the election impeded Nicolas Salmeron from participating on the elaboration of the 1869 Constitution.
Salmeron was elected to Parliament by the constituency of Badajoz in the general elections of 8 March 1871 and at mid October he was known as a brilliant member of Parliament in his defense of the International Association of Workers. In 11 November 1873, the I Spanish Republic was proclaimed; the two Salmeron brothers were to enter the Cabinet of Ministers in the Government of Estanislao Figueras. Nicolas was given the Ministry of Justice and Francisco the Ministry of Ultramar (colonial territories).

Nicolas Salmeron was the President of the I Republic for 50 days (18 July to 6 September 1873); his main problem was to conciliate between reformists and federalists. He presented his resignation because he refused to sign a death penalty. The I Spanish Republic ended with General Martinez Campos military coup and the Restoration of the Bourbon Monarchy in the name of Prince Alfonso (future Alfonso XII).