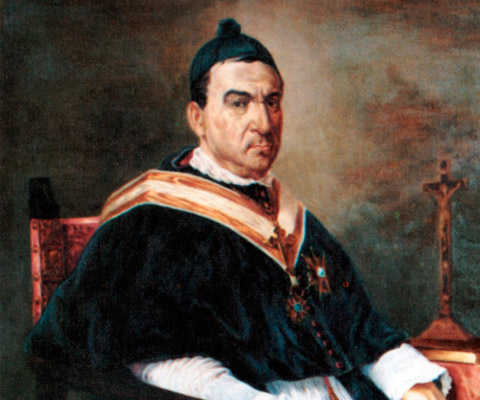 Jose Maria Orbera y Carrion was bishop of Almeria but he came from a humble family: He was the second son of seven children of the matrimony formed by Ignacio Orbera y Palomar and Maria Carrion y Llorens. He learned the trade of shoemaker and worked several years in the family business. He was brought up in humble, numerous and Christian family. From 1837 to 1841, he studied Latin and Humanities in the Royal Escolapios school. He continued his studies in the University of Valencia, obtaining his degree.


Once he decided on his vocation in 1844, he entered the Central Seminar of Valencia to study Theology.

In 1850, he became presbyter in Cuenca where he was a professor in a few seminars and took on other ecclesiastical posts. In 1852, he graduated in theology at the Ecclesiastical University of Valencia. In 1859, Jose Maria Orbera became graduate in Civil and Canon Law. Further on, he studied Administration, Palaeography and the first courses of Diplomacy. In 1860, he studied Archival Science and achieved the degree and became the library assistant at the Royal Academy of History.

Santiago de Cuba would be very important in his life. The Queen named Orbera as chaplain of honour in 1862, he boarded a ship for Cuba with the Archbishop of Santiago de Cuba. Together with other posts, Orbera was the director of the Seminar of San Basilio. In 1867, Primo Calvo had to leave for Rome, therefore he named Orbera as the ecclesiastical governor with ample powers. When Primo Calvo returned to Madrid he fell ill and wrote to Pio IX of the post given to Orbera and asking for permission to stay in Madrid till his health improved. Orbera presented his curriculum vitae for the vacancy of the doctorate of the Cathedral of Santiago, it was conceded in July 1868. When the Bishop died he was elected unanimously as chief vicar. He stayed together with Ciriaco Sancha in difficult times; a very important crisis that took place in the Peninsula. The situation caused great instability: the fall of Isabel II and a liberal government, a brief Republic and in 1869 the Nunciature in Madrid is attacked and the Minister of Colonies sent 12 priests to parishes in Cuba without consulting Orbera. A letter from Pio XII gave him new spirits “may you put all your efforts and cares in helping the Church”. The biggest problem was that the Government named Pedro Llorente y Miguel (a free mason) as the Bishop of Santiago without the intervention of the Vatican. Orbera had to do his duty and refuse to give in the power. Orbera was to have some difficult years, together with his secretary Ciriaco Sancha, they were imprisoned three times. He was condemned to banishment and Sancha to pay costs and be under vigilance as Orbera had written a pastoral refusing to give in to the civil authorities. In 1874, they were declared non-guilty of all charges and all bails deposited returned.

The military coup of Martinez Campos surprised him in Valencia, this brought back the Monarchy (King Alfonso XII) who he was able to greet (12/01/1875). There he met, Santa Soledad Torres Acosta, the founder of the Siervas de los Enfermos (slaves of the ill). At returning to Cuba he took them with him to promote their foundation.

Finally in 11 June, the Cabinet of Alfonso XII refuted the appointment of Llorente. Curiously in 13 May, Jose Orbera would be proposed as Bishop of Santander and on the 23rd of that same month they changed the assignment to Almeria. Why such a change? It seems that the person proposed for Almeria did not want to come.

He arrived in Almeria in 6 April 1875, he immediately began the pastoral visit to get to know the diocese and travel to inform the Vatican (Visita ad Limina) in 4 June 1877. Orbera took advantage of the feasts that were organised due to anniversary of Pio IX consecration. Obera brought an important team of priests from Valencia to help him carry out different tasks: the San Indalecio Seminar which reached great intellectual levels and forming very eminent priests; he founded the San Juan Seminar for poorer seminarians; he organised the convent of San Blas de las Siervas de Maria; he was able to reorganise the Puras monastery bringing nuns from other monasteries and he moved the Claras to San Anton, helping them revitalise their monastery life. Both Monasteries had been in ruinous state sin the Desamortizacion law (1920-1923, the state nationalised non-productive land) with few nuns. Orbera was very shocked to see the state Almeria was in. The walls had been knocked down and around the San Sebastian parish there were many shacks and poor little boys and girls walked around naked. The Bishop intervened in every possible way to help the poor children and he brought the Philippians order to care for the prostitutes’ children. He opened the Compañía de María School for rich and poor girls, as it was done at the time. He created the Sunday Schools and intervened so the Hermanitas de los Ancianos (order specialised in caring for the old) could come to Almeria. His work was non-stop to help the City educationally, culturally and in terms of charity. The Siervas de Maria opened homes in different villages of Almeria (he helped the Order with their school in Madrid). Orbera collaborated with Saint Soledad Torres Acosta to open a secondary school in Cuba and in Almeria. The Order helped in Almeria in many ways, especially when there was a great cholera epidemic; when everyone ran away, the Bishop together with the priests and the nuns stayed doing all that was possible, including burying the dead. He had met with the clergy from the villages to explain to them how to treat the ill. Therefore in 1855 , Alfonso XII, awarded him with the Cross of Isabel the Catholic Queen for his good work. The Pope Leon XIII named him assistant to the Solio Pontificio. He was a hero of charity. We must also highlight his support for the devotion of the Corpues and the Processional Custody. He died suddenly in the Siervas de los Enfermos novitiate. He was buried in the Compañia de Maria school and the City named the street where the school is located in his honour (Rambla Obispo Orbera).