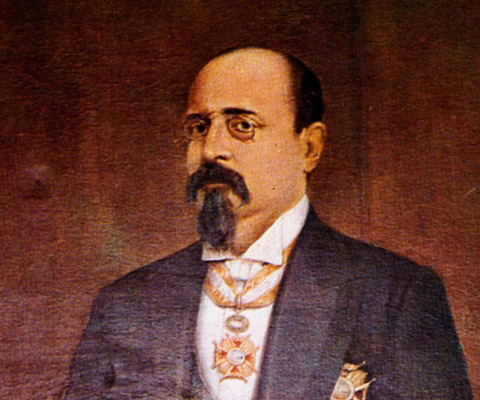 Carlos Navarro Rodrigo, main political figure of Liberal Almeria during the Spanish Restauracion (political period in which the Bourbons were restored on the Throne 1874-1931).

Once Union Liberal (liberal party of the time) was founded, a Journal with the same name was created in Alicante. From this Journal, Carlos Navarro Rodrigo systematically campaigned for the liberal cause in Alicante through his column.

As a young journalist, he was an ambitious politician and had the ability and vision to become part of the political elite while it was still being formed. Loyal to the President of the Union Liberal party, he always defended moderate views between the more advanced ideas of Rios Rosas and the conservative view point of Canovas del Castillo. During the September 1868 Revolution (liberal revolt against Isabel II), Carlos Navarro Rodrigo positioned himself so that he was included in the Junta Revolucionaria (provisional revolutionary government) in Madrid, where he defended a conservative position. Named Sub-secretary for the Presidency with functions as Secretary for the Government Cabinet in the Coalition Government that supported the Monarchy. Once the Coalition broke apart, Carlos Navarro Rodrigo became a member of the Constitutional party of Sagasta (main liberal figure of the Restauracion) and was named Minister of Fomento (Public Works) in the Sagasta government. He ran for Parliament in Almeria for the district of Purchena. In the Restauracion period, he became the head of the conservative wing of the Party and consolidated his position as intimate friend and political ally of Sagasta. In 1879, his influence in Almeria began to be felt once again and in Parliament he created a group of followers known as the Tercios Navarros (Navarro is brigade) this made him the most influential member of the Party after Sagasta.

Sagasta and the Fusionistas (liberals pro Monarchy) came into power in 1881, Carlos Rodrigo Navarro became the strongman of Liberal politics in Almeria. He imposed his views over the more advanced ideas of Felipe Vilches. He was voted to Parliament in the district of Sorbas in 1881 and his ambitions to become President of the Council or of Congress made him take a more critical approach towards Sagasta is policies.

In the 1886 elections, he was voted to Parliament in the constituency of Almeria and was named Minister of Fomento (public works) with Sagasta is Government. In 1882, Carlos Rodrigo Navarro was able to push through Parliament and Senate the Linares-Almeria Railway Project (R.D. 5-V-1887), this piece of legislature opened the way for a railway line connecting Almeria with Madrid.

In the 1889-1890 legislature he was elected to the Senate by the Province of Almeria and between 1891 and 1893, Carlos Rodrigo Navarro was again elected to the Senate. Almeria was always among his preferred places and for this reason he tried to incorporate members of his family to local politics to continue his legacy.

When the Carlos Rodrigo Navarro died, he was out of politics and the City Council of Almeria named him Adopted Son and put his name to one of the main streets of the City.