Inicio » About Almería » Climate and Geography

The province of Almeria, by its peculiar geography and its position peninsular southeast along the Mediterranean Sea, has different types of climate: Mediterranean, desert, continental climate, etc. One of its main features is a sky almost always sunny and bright.

On the coast it is also characteristic of the west wind and also close to the capital raise, famous for often raise the temperature several degrees Cando appears.

Rainfall is scarce, being the Cabo de Gata where less rain in the Iberian Peninsula. Also, the Tabernas desert is technically the only arid desert of the European continent which gives unique natural features which helped her become a movie set, music videos and television commercials.

The average annual temperature is 18.7ºC, reaching over 30 ° C in the hottest summer months. 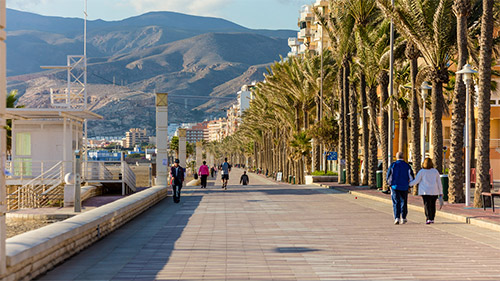 Geography – One of the most mountainous provinces

In the tenth century, Abdurrahman III, first Caliph of Cordoba, sought an enclave outside the headquarters of the fleet of war, to defend the coast against the incursions of their enemies and pirates. They found a special place in a seaside neighborhood that belonged to the cora of Bayyana (current Pechina). This neighborhood, which was called Al-mariyyat- Bayyana “Watchtower Pechina” was a group of houses sheltered by the mountains, which was engaged in fishing and livestock. Large farms were inside, on the banks of the river Andarax, lack of drinking water in the coastal zone.
The dimension of the bay, natural shelter of boats, the proximity of the foothills of the Sierra de Gador, ideal to build a fortress high and the various sources of groundwater found in this area were the key to the founding of Almeria, giving the Caliph category Medina (city) and sending raising walls that will surround the corner between the new port and mountains. 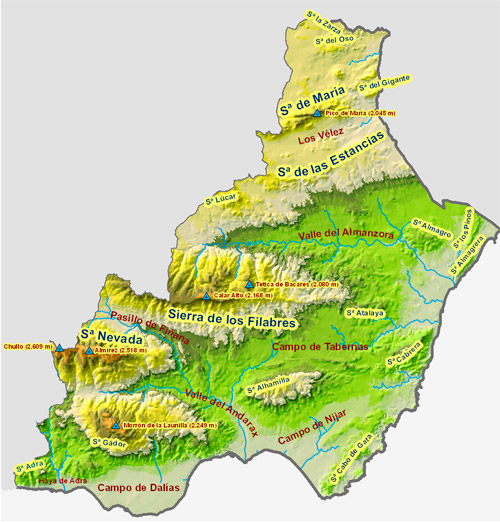 Perhaps they could not foresee was the rapid growth of this new population center. The safety of its walls and its strategic location attracted traders who were leaving Bayyana and other areas to locate their businesses near the new port. Almería in the eleventh century was already one of the most populated areas of the peninsula.

Its geography has also been instrumental in other historical moments, as in the conquests of Alfonso VII of Castile (XII century), the Catholic Monarchs (s. XV) and more recently, the exploitation of mines Alquife (Granada) and mountains of the province, which had its commercial output by the Almeria port, bringing the railroad to the same sea. (Mineral Cargadero “English Cable”).

During the Civil War, its geographical isolation invited back to engineer a passive resistance, as happened with the impregnable Alcazaba: the construction of the Shelter of the Civil War in the basement of the historic center.

In the rest of the twentieth century and early twenty-first century, the city undertook the largest growth in its history, towards the east, only flank on level that allows the development and urban growth. Precisely between the primitive city and Cabo de Gata new outfitting of the new Almeria, the resort of El Toyo, airport, University Stadium of the Mediterranean Games and looming future projects.