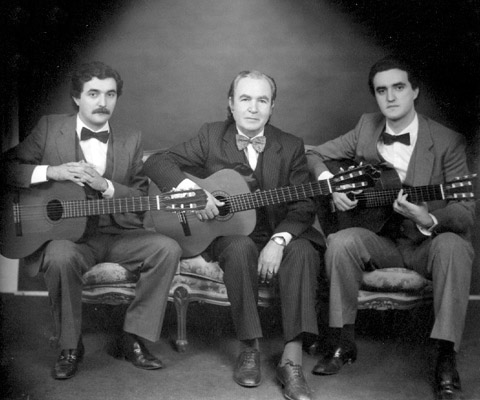 Jose Fernandez Campos, Richoly was born in Adra (Almeria) in 1920 in a family originally from Berja (Almeria). The family returned to Berja where Richoly passed most of his youth. His mother, Gador Campos Padilla and his father, Salvador Fernandez Richoly, was his his first guitar teacher. Salvador Fernandez Richoly, an ethnic gipsy, played the guitar, the mandolin and the lute and was very famous in the Almeria Alpujarra mountain area.

The maestro guitar player Jose Fernandez Campos alias Richoly (from his father is second name) was one of the best guitar players ever born in the province of Almeria; born in 1925 in the town of Adra, he lived most his life in Almeria city where he revolutionized the City is music culture. He was also a member of the Indaliano movement (movement to promote Almeria is cultural scene), he coincided with Celia Viñas and with the founder Jesus de Perceval.

Richoly made his debut in 1945 as a guitar soloist in the Menendez y Pelayo University. Arriving in the City of Almeria during the post war period, he worked as a guitar teacher and soloist and also as a teacher. At the Apolo theatre, he organized the choirs and dance sections of Educacion y Descanso (cultural organism belonging to the vertical sindicate of the Regime) and of the Seccion Femenina (women is association belonging to the Regime). He carried out World tours with these organisations as artistic director and performer, contributing to the diffusion of Almeria is culture and folk music. For 30 years, Richoly would teach guitar at the Apolo Theatre.

During the 50s, Richoly, already a well known artist in Almeria, would enter the local Administration as a public worker in the rent, registry, statistics and urbanism department. He had no problem alternating his job with his music activities.

He influenced a great number of amateur singers, dancers and guitar players but his artistic work surpassed that of local folklore. He interpreted pentagrams belonging to Albeniz, Turina and Falla; standing out his version of Farruca.

Following the advise of Celia Viñas and Manuel del Aguila, Richoly gave a brilliant concert in the Francisco Villaespesa municipal library presenting his works to the public of Almeria. He, later on, created the quartet Manuel de Falla and afterwards the Trio Richoly (made up of Jesus and Francisco Miranda and himself). This Trio achieved success and many public appearances including recordings.

The Maestro died in the city of Almeria in 1995; a Bust in honour of the Artist for his contribution to music and for being one of the best guitarists ever born in the province of Almeria was placed in the Administracion Vieja square, opposite the UNED (Spanish Open University).