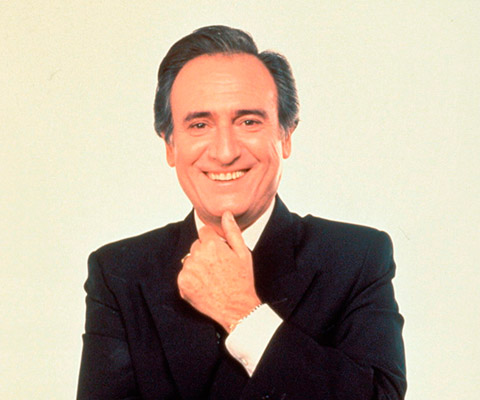 Manuel García Escobar was born in 19 October 1.931 in El Ejido, what was then a small village. He was the fifth child of a family of 10. His father, Antonio Garcia worked in the fields although he tried other trades in order to support such a big family. He had a bread and breakfast, he did some commerce and he even became a cinema entrepreneur opening the first cinema in the Village. The mother, the sweet madrecita Maria del Carmen, together with her husband were the soul of the family and worked non-stop to care for all of them.

Antonio Garcia always insisted that his children have an education. His other great passion was music, he opened his children to this art form. Since they were small, they learned to play the guitar and the lute. Baldomero became the brother in charge together with Salvador and Manol;, they began to play in feasts and wedding with the artistic name Los Niños de Antonio Garcia” (Antonio’s sons). Manolo had already begun to dream about being a singer someday.

In the terrible postwar years, Antonio Garcia met a teacher who had lost his wife and son in the War. Antonio gave him a roof and he became the teacher of his children. The new member of the family, Antonio Manzano, was surprisingly also a great music teacher and in this way, the Garcia brothers learned music at home.

But in postwar Spain, there was also a terrible draught in the Country and all the efforts were not sufficient to make ends meet. Therefore Antonio, after having his son Baldomero insist many times, let him and Salvador and Manolo emigrate to Barcelona looking for fortune.

Only 15 years old, almost a child, Manolo and his two brothers set out for the great adventure on a train that would take them 800 kilometres from their home and family. In Barcelona they rented a room in the Barrio Chino (a poor and difficult neighbourhood). Salvador found a job and Baldomero had to work in the black market and Manolo did what he could and was the cook. Several months later, they moved to an apartment in Badalona and in a short time the rest of the family moved in with them, including the father’s older brothers and their couples.

The whole family (except the children that were at school) worked hard. Manolo was not the exception, he found a job in the metallurgic industry, but had health problems. Afterwards he became an apprentice of a cabinet-maker, but he changed to the construction sector as it was better paid. Finally, he found another job in the chemical industry where he worked for five years.

In those times, there were many street fairs, where young people and elders enjoyed themselves preparing the stage for the orchestra as much as the dancing and performances themselves. The feasts also organised singing and dancing contests. Manolo participated in each one he could, because his dream was still to sing. He sang the popular songs of the moment with his special touch and his clear voice that excited the audiences so much.

The fame gained at the contests helped Manolo introduce himself in another kind of shows: cinema-varieties: two films and a show. In one occasion, he participated in a show with Raquel Meller. When the diva bumped into him around the dressing rooms, she told him:” Fellow, you are going to make it… I know enough about this business and I have seen a lot. You will make it, I assure you”.

HIS BEGINNINGS WITH HIS BROTHERS AT THE GUITAR

At the beginning of the 50s, Manolo had to do his military service; he was sent to Larache (Morocco) where thanks to his personality and his songs, he made a lot of friends. One of them, Eusebio, nephew of a radio star, gave Manolo a chance in this media. As soon as Mr. Jose Maria Nadal heard him, he invited Manolo to perform on Radio Barcelona in a programme for novel artists. In these performances, he was accompanied by Juan Gabriel. With the artistic name Manolo and his guitarist Juanito Garcia, they were examined to have their professional license, which they of course passed.

While all this was happening, the Garcia brothers were studying secondary school because the music world was not that of a sure thing. They finished their studies and did the public exam to work in the post office, at the end, there were five workers named Garcia Escobar in the post office in Badalona. The five brothers following the instructions of Nadal, he had become their artistic father, formed the group Manolo and his Guitars. They had a personal style and a new rhythm. Although Jose Maria and Gabriel abandoned quickly the Group, leaving Manolo as the singer and Salvador and Juan Gabriel as guitarists.

With the Escobar sound already set, the Group recorded their first album and their fame began to grow. They started to do more shows and they had to choose between the job at the post office as a public worker which was a sure thing and the adventure in music. They opted to ask for a two year leave so they could always return to their jobs.

THE FIRST TOURS OF MANOLO AND HIS GUITARS AND LOVE

In 1958, they received their first contract in an important venue in Playa de Aro, Costa Brava. After repeating a second season, the Group got a contract to tour the South of France. Once they finished the tour successfully, they adventured themselves to Paris, there they stayed several months performing without stop. Back in Spain, they got another contract in the same venue in Playa de Aro. There Manolo met a German girl who was on holiday with her parents, it was love at first sight. Ana Marx returned home, but got Manolo a contract to play in Germany. A few months after knowing each other, Manolo and Anita got married in 10 December 1959 in Cologne.

After a short honeymoon in Germany, the new couple spent Christmas with Manolo’s family. Later on, they travelled to Almeria, contradicting the Spanish saying “no one is prophet in his own land”, Manolo had a great success wherever he performed.

In the following year, Juanito Valderrama called Manolo to contract him for his show. Thanks to this, Manolo would travel all around Spain for two months, where he would perform in bullrings before thousands of people. Manolo’s dream began to come true, he was so sure of himself that the following year he turned down Valderrama’s offer (even though they were on very good terms) and started his own show.

HIS DEFINITIVE SUCCESS AND HIS CINEMA CAREER

In 1961, Manolo made his debut in Cordoba, in the Duque de Rivas theatre with his own show: Manolo Escobar Sings. From then on, Manolo became a star, performing all over Spain with different shows and recording tens of albums that were quickly successful.

In 1963, he began his acting career in the film the Los Guerrilleros (the guerilla soldiers); his career would last until the 80s, making one film per year. Manolo is a natural actor, the characters he plays are nice ordinary people like himself and there are always beautiful women around. Of course, there is always a happy ending.

Performances in cinema, shows and television and hit albums are part of the career of this simple man that gets to the public’s heart not just by the way he sings but by his kind, happy and honest manner.

In June 1975, a national homage to Manolo took place in the Sports Palace in Barcelona. Manolo received 19 gold albums of what had been his career up to that moment. Concha Velasco, his indescribable companion in so many films, was the presenter of the show with an audience of more than 10,000 people. Manolo Escobar also received the Gold Medal from the city of Almeria and the declaration of Adopted Son; distinctions from the Spanish Author Society, the Diputacion of Barcelona and the City Council of Badalona and a long etc… . Even the General Direction of Spanish Post awarded him with the Golden Insignia of the Company which is only awarded in certain occasions. The Spanish Post also created a commemorative stamp that was only to be used once during the event, which was stamped on a giant photograph of the Singer.

In 1978, a new member of the family arrived: their daughter Vanessa. This was the perfect topping to their happiness, all their fans were extremely happy. It was all that they needed to have complete happiness.

Juan Gabriel, the composer of many songs, wrote a beautiful bolero to Vanessa, his niece: My Little Flower. The Song became so popular and it was so marvelous to see Manolo sing the Song and Anita hold the child in her arms. Vanessa some years later, even sang a song with her father… Papa, papa, te quiero mucho. They were so popular that even the name Vanessa became popular.
After the millionaire success Y Viva España, which surpassed the previsions of Manolo and his record company. Manolo started out on a new project which has not been sufficiently valued: he recorded a selection of old popular Spanish music. Hundreds of immortal songs from the Copla, but interpreted with his own style: Antonio Vargas Heredia, Suspiros de España, Malvaloca … .
His style has become more modern as years passed; he has even recorded an album of songs from other singers and groups from much different styles but they always sound fresh and new with his interpretation. But he continues to be faithful to his roots and his repertoire of pasodobles, rumbas , ballads and Mexican songs.

In the 80s, Manolo abandoned his cinema career but at the beginning of the 90s he tried at presenting TV programmes. He had two successes Goles son Amores and Mañana seran Estrellas. His jovial manner was always present and he showed he could excel at whatever was proposed to him.