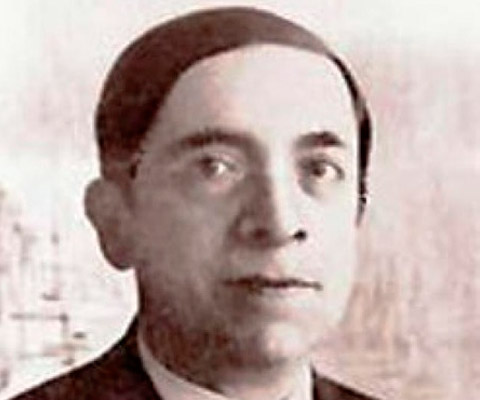 Francisco Villaespesa Martin great poet born in Laujar de Andarax (province of Almeria) in 1877 and died in Madrid in 1936.

At the age of two, his mother passed away and his father married his aunt.

In 1885, his father was named judge in Almeria and the whole family moved to the City. In 1888, Francisco Villaespesa began secondary school and in 1894 he went to Granada to study Law, Philosophy and Literature; careers he never finished. His years in Granada introduced him to the young artistic and cultural scene of Granada. In 1897, he first moved to Malaga and afterwards to Madrid where he began to be known as a poet.

In 1898, he returned to Almeria and in 1899 he married his fiancé Elisa and his poetry and writings began to be appreciated. In 1990, he became familiar with well known writers and poets such as Juan Ramon Jimenez and Ruben Dario.

His apartment in Madrid, which he shared with Elisa, was a focus point for reunions and discussions where more than a thousand projects originated in those reunions. In 1903, all this happiness came to an end with the death of Elisa due to tuberculosis, this left the Poet alone with his little daughter Elisa and with many memories which would take shape in his poetry.
After his wife is death, the Poet travelled through Europe: Portugal, Italy and finally Paris after which he returned to Madrid in 1904.

In 1905 Francisco Villaespesa met the aristocrat Maria Dolores Garcia Rubin from Cadiz, who was married at the time with two children. Dolores and Francisco started a new life together and had two children; they would never part.

The following years were to be very prolific in modernist poetry until the poet is final days.

In 1915, Francisco Villaespesa was at the height of his career and in 1916 he founded the Cervantes magazine and the collection of his complete works was published.
His success and fame is consolidated between 1917 and 1929 and several anthologies of his verses were published in Spain.

In 1925, the Government of Brazil invited him to the country to translate Brazilian poetry into Spanish; several volumes were published in Spain and Brazil. In Rio de Janeiro, Francisco Villaespesa suffered a hemiplegia which paralysed half of his body.

In 1931, the Poet had economic problems due to his dedication to literature; the Spanish Government paid for the costs of his repatriation and by recommendation of Fernando de los Rios (minister and prestigious politician of the II Spanish Republic) conceded him a life-long pension of 8,000 Pesetas.

Once back in Spain, he received many tributes in theatres all over the Country, but his health was already too poor. In 1933 taking advantage of the new Republican legislature, Francisco Villaespesa marries his divorced companion Maria Dolores. In 1935, Francisco Villaespesa publishes his last book Manos Vacias (empty hands).

In 1936 after a brief recover, the Poet is health got worse and finally Francisco Villaespesa died in April 1936 at his home in Madrid at the age of 58. His funeral was a very solemn and important event in Madrid. He was given official honours and buried in the Pantheon of Illustrious Citizens in the San Justo Sacramental cemetery. Francisco Villaespesa was the last Spanish member of the Modernist movement.