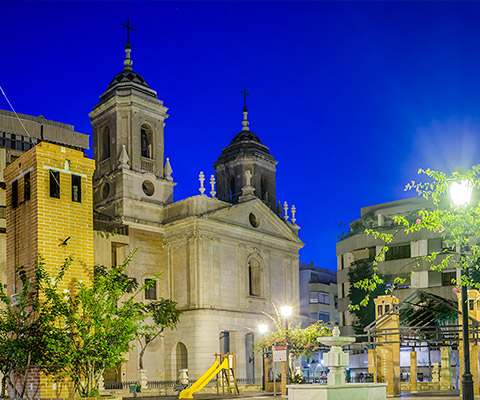 Square was designed in 1848, at the request of the Civil Governor Eugenio Sartorius, with gardens and a gazebo, alternating its name from Plaza de San Francisco with San Pedro. In 1862, it would be called Isabel II and Freedom in 1868.

The Roundabout San Pedro or Sartorius, as it was known by mid-century, was built on the plots of the former convent of San Francisco and its gardens, expropriated from the church after the confiscation of 1835. Following the purchase of solar de las Huertas by Ramon Orozco (an important local businessman enriched by the mining boom of Almeria) building began in 1855, at this time creating urban spaces of the area in and an upward expansion, consists of a large square flanked by straight streets: streets Castelar and San Francisco, the area attracting families of the gentry.

The church, an outstanding example of neoclassical architecture in Almeria, along with the Cloister of the Cathedral, rose in the late eighteenth-early nineteenth century on the ruins of the convent of San Francisco. After the confiscation of the convent, the church became what is now the current parish of San Pedro. The altar was before San Francisco, and is now found at San Pedro. At the top there is a large medallion embracing St. Francis of Assisi and St. Dominic. Before it a pediment, and leaning on it, two angels representing the three theological virtues of faith, hope and charity. The church retains an ancient chapel of the seventeenth century, the only one to belong to the old convent. Its main facade, very characteristically, has a portico between two twin towers, whilst the other side is very simple. These are on Ricardos Street. The tower that gives this street is built in the early twentieth century and typical historic style of the time.